Achieving accurate detection and identification of people and goods for security purposes and supporting the operation of heavy machinery and equipment in busy logistics hubs demands a range of specification and configuration considerations. Frank Crouwel, Managing Director of NW Security Group explains some of the key set up considerations in major logistics hubs.

Securing a high value transport and logistics hub is a complex business. Take the scenario in which goods are arriving by road, rail or even via water, all into the same hub. Containers are stored on site prior to loading onto a lorry, or into ship or train. Alternatively, goods are immediately moved from one mode of transport to another.

All goods movements need to be tracked around the site and their identification marks logged on accurately time-stamped video recordings for later review if needed. Dedicated cameras can also be set up on the same network to deliver specific operational benefits – perhaps automatically logging container numbers and supporting crane operators to work more safely and efficiently.

These sorts of highly sensitive sites are normally secured using high security fencing. Once perimeter fencing is in place, cameras can be sited to cover this fencing and ensure that any attempted perimeter breaches are detected and intruders identified. More on this later. Let’s first consider security considerations at site entrances.

It also makes sense to deploy a PTZ on a high mast close to the entrances and exits to provide an overview of the whole entrance and exit area for additional situational awareness. We have been deploying high resolution Axis PTZ delivering up to 40 times optical zoom regularly.

This capability enables users to thoroughly investigate something in the field of view which has triggered an alert. It also is possible to auto track detected objects or people from camera to camera if auto tracking capability has been configured correctly between other PTZ cameras across the site.

Once you move beyond the site entrance, the next consideration is to provide strong intrusion detection capability from the cameras you must site to cover the perimeter fence. For large sites with long fence lines, it makes good sense to consider deploying thermal cameras.

If the site already offers powerful lighting at night (above 50 lux), you could consider optical cameras without deploying additional infra-red (IR) lighting. However, be prepared for accurate detection distances to fall by three quarters to below 100m in those medium-density fog conditions. When we run the price comparisons for installing more masts and optical cameras versus the fewer, more expensive thermal cameras on masts, it often proves more cost effective to deploy thermal cameras, especially when covering larger sites.

There are multiple other configuration considerations for optimum detection. For example, thermal cameras must be set high and significantly tilted towards the ground to eliminate much of the sky to optimise detection distances. For example, with no fog a high quality thermal camera can deliver accurate detection of objects as much as 500m away from the camera, provided it is set up at 6m height on a mast set to the right angle of tilt.

Once the site entrances and exits are secured and perimeter fence line is covered, the next item to consider is tracking and identification of intruders if they are moving around within a large site. NW Security now deploys combined Axis PTZ and multiple fixed camera offerings. Together these camera systems can provide 360 degree coverage, together with full tracking and zooming capabilities, as long as they are sited correctly to eliminate blind spots which will be created by tall objects in the field of view.

They can also be configured to auto-track moving objects or people from PTZ coverage zone to PTZ coverage zone. So, using a joy stick, operators can monitor a person moving across a site at speed and then, when the intruder comes closer to one of these cameras, he can zoom in to identify the individual accurately and capture this video evidence rapidly.

The 360 degrees coverage is provided by four fixed cameras integrated with the PTZ camera in a UFO-style housing. So, whichever direction a suspected intruder is moving through a site, a CCTV operator can proactively track them between camera locations.

We are finding it increasingly valuable to also think of cameras as visual sensors which can be deployed for multiple operational benefits. At logistics hubs, it’s not uncommon to fit high resolution fixed cameras with electronic image stabilisation onto the underside of the crane operators’ cabins. These cameras then provide an enhanced view below them as they are picking up and manoeuvring containers onto a train carriage, a ship, or simply to help operators stack containers with greater speed and accuracy on hard standing.

It is also worth considering locating some additional cameras to provide visual evidence in case of damage to goods, pallets or containers in transit. Particular attention must be paid to straddle carrier routes for manoeuvring of containers, as accidents are more likely in these areas if space is confined.

Cameras may also be required in ‘no-go’ zones, grain towers and in areas where heavy machinery is in regular use, as these are the areas where health and safety incidents are more prevalent. Logistics operators striving for zero harm by eliminating serious Health and Safety incidents will nearly always need additional cameras to monitor high risk operations site-wide.

Where the logistics hubs also includes a port, you need to consider potential damage to quay sides where ships dock for loading and unloading. It is much easier to determine who is responsible for damage caused in cases of accidents if video evidence can be provided to support an insurance claim or health and safety incident investigation.

NW Security has also deployed cameras to provide visual inspection of plant and machinery during usage to ensure that the operator is using equipment correctly. Other cameras are often deployed to monitor components which may be subject to wear and tear. A close-up view of these components or devices can be used to support decisions on timing of swapping out ageing components for new ones ahead of failure – thereby avoiding costly operational stoppages.

Cameras are also used for traceability of specific containers for the purposes of reporting back to owners and to end customers. Data from container movement reports can then be analysed to gauge typical causes of delay – useful business intelligence for planning purposes. There are many other non-security uses opening up for visual sensors just as there are for temperature control sensors and much else besides as the Internet of Things creeps further and further into the operations of transport and logistics hubs.

I’ve been working to support NW Security’s installation projects for nearly 18 years now. During that time, it has been consistently interesting and challenging to support them with many ambitious projects to secure and add operational value to high value logistics hubs, ports, container terminals, warehouses and distribution centres around the UK. Thankfully, securing high value sites like these has remained at the forefront of our product development over the years. So, we’ve been a great fit for NW Security in the logistics space. They are one of our leading Gold partners. Their expertise in installing and optimally configuring these solutions in the logistics market is second to none.

As goods in transit have become a prime target for organised crime and the logistics supply chain has become ever more complex, it’s become increasingly challenging to provide full traceability of goods from origin to end retailer.

Thankfully, the surveillance cameras and video analytics software available to us on the best cameras enable NW Security’s customers to do far more with less equipment and cost than in the past. The cameras which we fit are also increasingly used as visual sensors – helping our customers to keep their operations running smoothly, efficiently and safely.

Systems can be configured to accurately monitor activity, detect, track and identify intruders, capture lorry number plates and container markings faultlessly, spot operational anomalies, ensure health and safety rules are being followed and capture identifiable evidence when something goes wrong which may demand a security or operational review. 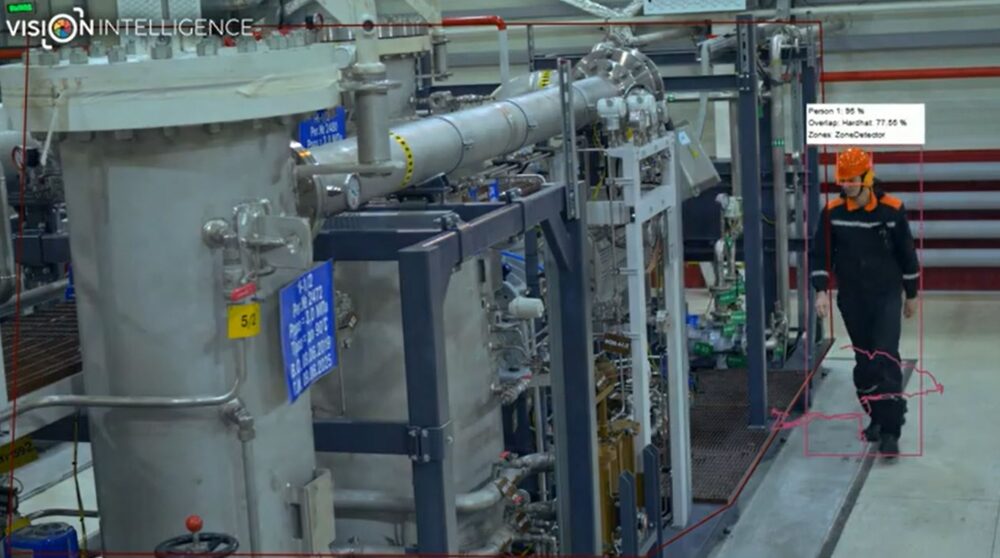 Monitoring PPE use, Health & Safety and compliance in a danger area.

Conveyor belt stagnation detection in a logistics centre. Use case where an Axis network camera with on-board analytics from Vision Intelligence overlooks a conveyor belt that is moving boxes.